“When We Fight, We Win!”: The Art of Transformative Organizing
Thursday, 28 January 2016
By Greg Jobin-Leeds, The New Press | Book Excerpt published by truthout.org 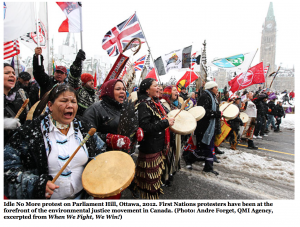 The following is an excerpt from the introduction to When We Fight, We Win! Twenty-First-Century Social Movements and the Activists That Are Transforming Our World. Author Greg Jobin-Leeds explains the book’s title, the philosophy of transformative change that drives the organizers featured inside and the specific qualities that these organizers share. Jobin-Leeds created When We Fight, We Win! in collaboration with AgitArte, a collective of artists and organizers who have been initiating and leading education and art programs in marginalized communities since 1997. 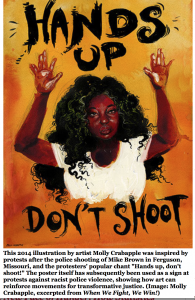 This 2014 illustration by artist Molly Crabapple was inspired by protests after the police shooting of Mike Brown in Ferguson, Missouri, and the protesters’ popular chant “Hands up, don’t shoot!” The poster itself has subsequently been used as a sign at protests against racist police violence, showing how art can reinforce movements for transformative justice.
The book’s title comes directly out of the experiences of AgitArte, whose members heard the phrase while working on a Boston anti-eviction fight. When We Fight, We Win! drives home the overarching points of the book: winning requires a “we,” a community, a group, an organization. And transformative change, in the face of powerful forces, requires a fight.

When we fight, we often move ourselves out of our comfort zones to face forces and people that view the world differently and may not be ready to change. When we fight – building an organization, joining a community of activists – we win not only communal victories but also our own personal transformation, enabling us to discover common root causes to problems that had seemed unconnected before. Understanding root causes can ally us with others – across issues, cultures, identities. This aggregates individual fights into broad movement struggles, and by working in solidarity together we can realize far-reaching, systemic change. Winning lies not in a single victory, but in many victories and the lifelong struggle to change injustice and create a future based on a bold, transformative vision. Claiming our humanity and right to fight, by standing up for justice and building a community of activists, is a win in itself.

When we fight, we participate in creating the future. We become part of the inspiring history of movements. We learn from history and we are creating it.

Each story and piece of art shared here is a small taste of the massive number of organizations and people in this global struggle to create a just world. Author and activist Paul Hawken calls it the “blessed unrest” – the ongoing work that has to be constantly regenerated and reinvented. 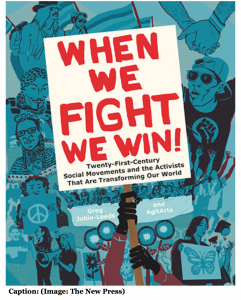 What Is Transformative Organizing?

Many have contributed brilliant perspectives on the essential ingredients of movement organizing and transformation. Excellent work has been done by Grace Lee Boggs, Antonia Darder, Robert Gass, Adria Goodson, Taj James, Eric Mann, Judith Nies, Manuel Pastor, Rinku Sen, Ella Baker, Howard Zinn, Paulo Freire, AgitArte, the Zapatistas, the Black Power movements, and so many others. They inform this moment in history and this book.

• Build organizations that are grounded in the most impacted communities
• Create transformative visions
• Tell powerful stories
• Go to the root cause of problems
• Reclaim the intersection of our struggles and identities
• Disrupt power, changing who has it and what to do with it once reclaimed
• Build solidarity and stand together

Each chapter, and the epilogue, show these attributes in action. Transformative organizers share these seven attributes and many more. These contemporary activists organize with a core group of people, develop an alternative vision of the future, interrupt cultural narratives, enroll allies, and develop global perspectives and broad networks. Transformative organizing transforms activists from bystanders or victims into drivers of change. It involves many levels of transformation: personal and spiritual, organizational and communal, cultural, and political.

Copyright (2016) of Greg Jobin-Leeds. Not to be reprinted without permission of the publisher, The New Press.

By: Greg Jobin-Leeds Thalia Carroll-Cachimuel LGBTQIA+ Organizations to Donate to & Learn More About Southerners On New Ground (SONG) is a home for LGBTQ liberation…